Mark Hughes was left feeling disappointed after Stoke threw away a two-goal lead at home to Swansea City.

Goals from Ibrahim Afellay and Bojan Krkic either side of half-time had put The Potters into a commanding position.

But Gylfi Sigurdsson pulled one back for the visitors, before substitute Alberto Paloschi levelled the scored with just over ten minutes remaining to secure a 2-2 draw.

And Hughes was frustrated that his side failed to put the game to bed.

“We are obviously hugely disappointed to have thrown the game away having performed really well to put ourselves into a really strong position,” he told the media during his post-match press conference.

“We created good opportunities and we could have been further ahead to be perfectly honest had we had a little bit of luck at the top end of the field.

“As we all know though, a two-goal lead, for whatever reason, can be very difficult to protect and once we conceded the first goal we became a little bit anxious.

“In saying that, Swansea have had two shots on goal throughout the afternoon which have both gone in, and they go back home with a point in the bag.”

Hughes was also reeling that Swansea’s equaliser was allowed to stand, the former Manchester City and QPR manager insisting that goalkeeper Jakob Haugaard was unsighted by Gylfi Sigurdsson in an allegedly offside position.

“The disappointing thing from our point of view was that the second goal they scored should have been ruled off for offside,” the Welshman asserted.

“Their lad, who was right in front of Jakob, had to jump out of the way to allow the ball past him when stood in an offside position, so that is frustrating for us.” 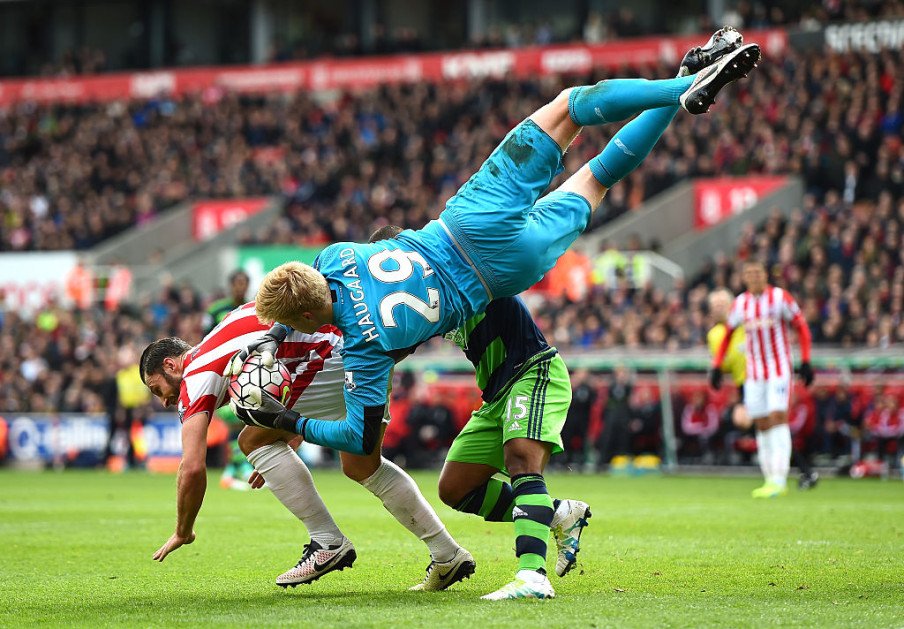 Nevertheless, Hughes was pleased with the performance of his stand-in goalkeeper.

Haugaard was awarded a first Premier League start in Stoke City colours after first-choice shot-stopper Jack Butland was ruled out for the rest of the season having fractured his ankle whilst on international duty with England.

And Hughes believes the Danish-born keeper produced a confident display against The Swans.

“There wasn’t a lot he could do about either of the two goals to be perfectly honest,” the 52-year-old added.

“The first one went straight through Glenn Whelan’s legs and when that happens it can be very difficult for a goalkeeper to react to that – he had no chance with it really.

“The second one has gone through legs again and has taken a big deflection off Philipp Wollscheid before flying into the net.

“All in all I thought Jakob did really well today – he was extremely confident and went about his business in a professional and calm manner.”