Jack Butland is ruled out after fracturing his ankle and Jonathan Walters is also absent having undergone knee cartilage surgery.

Erik Pieters is expected to return from injury but Geoff Cameron and Glenn Whelan both face late fitness assessments.

Andre Ayew will be out of action for the third game in a row with an ankle injury.

Jefferson Montero and Modou Barrow will have late fitness tests following their return from international duty. 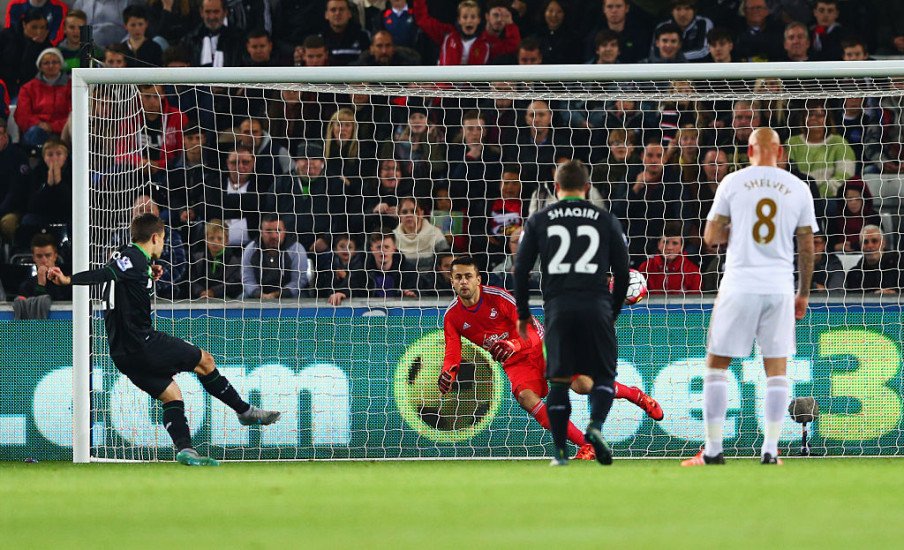 A fourth minute penalty from Bojan, after the Spaniard was impeded by Swansea captain Ashley Williams inside the box, proved enough to secure Mark Hughes’ men all three points.

What the bookies say…

Who is the referee?

Where can I watch the game?

The match is not live on television but highlights will be available on the BBC’s Match of the Day programme.

What the managers say…

“We are on a good run of form at the moment having won three of our last four, and I think only Tottenham and Leicester have a better record than us over a six-game period, which is encouraging.

“We are getting a bit of consistency to what we are producing now and if we can continue that then we should end the season well.”

“If I can work here in the future, I will be very happy. I am proud and happy to be here, but I do not know what the future holds.

“I can say that the most important thing is Swansea being safe, and afterwards we will see.”

The Potters have lost just one of their last five matches against Swansea (W2, D2).

Both sides met on the same date during the 1954-55 season, with Stoke recording a 5-3 away win on that occasion.